THESE LOUIS VUITTON SCREEN HANDBAGS ARE A GLIMPSE INTO THE FUTURE

The French luxury brand told Engadget that the prototype bags are “the basis for reconsidering the digital Canvas of the Future,” adding that it is “always in search of the fusion of savoir-faire and innovation.” According to a press release, the sci-fi accessory aims to blur the lines between smartphone and bag.

The handbags feature built-in flexible displays with a 1,920 x 1,440 resolution. While LV has not confirmed whether the screens were made in-house, we can see that one of the prototypes includes a single screen while the other has two. Both displayed videos of city views and what appeared to be a demo of an internet browser.

As you can see from the video above, the public-facing screen appears scrollable. So while the aim may be to integrate phone-functionality and your bag, you might want to exercise caution when deciding what app to open on your commute. 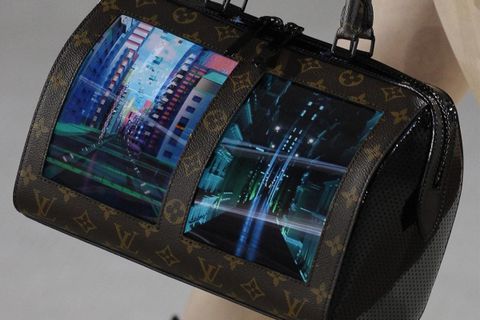 #LVCruise Canvas of the Future. #LouisVuitton premiered prototypes of a new cutting-edge bag design on the runway today. Watch the show now on Instagram