He wasn’t on schedule, but Kanye West dominated Paris Fashion Week. So what was he doing in Paris? Was he happy to be back?

“That’s a big question,” West tells Highsnobiety and a select group of journalists just minutes before models hit the runway to show off his YEEZY Season 8 collection.

“I stopped doing merch, like, four months ago, and then we started working on the operabecause I wasn’t pushing myself enough,” West continues. “We were doing $1 million a night in merch — I remember when I first started in fashion and we did the first Kanye collections, everyone kept saying, ‘Just do a T-shirt, The Row started with a T-shirt’ because they had to do this celebrity comparison. And we fought to not do T-shirts, and then I looked up and I was only doing T-shirts. So we stopped, and we started focusing on changing, making new shapes.”

On Thursday afternoon, between the womenswear shows of Off-White™ and Rick Owens, word on the street was that Kanye was in town. He had something to show. By Friday night, international editors, buyers, and friends of the West family received a clear message: “We would like to invite you to Kanye West presents Sunday Service. We ask that you do not disclose this personal invitation.” Another message followed: “The West Family would like to invite you to an intimate presentation of YEEZY Season 8.” The official invite stated: “Here is a little piece from our home in Cody, Wyoming.” Now that’s a way to get a fashion crowd excited.

At Sunday Service, held in Paris’ historic Bouffes du Nord theatre, 150-some fashion insiders — including Simon Jacquemus, Haider Ackermann, A.P.C.’s Jean Touitou, Balenciaga CEO Cédric Charbit, Arthur Kar, Christine Centenera, and Derek Blasberg — sang, danced, and came together as one, like only the rare fashion show has the power to enable. Kim and Kourtney attended the ceremony in full latex Balmain runway looks. A single face mask was seen. It was the church of the present. 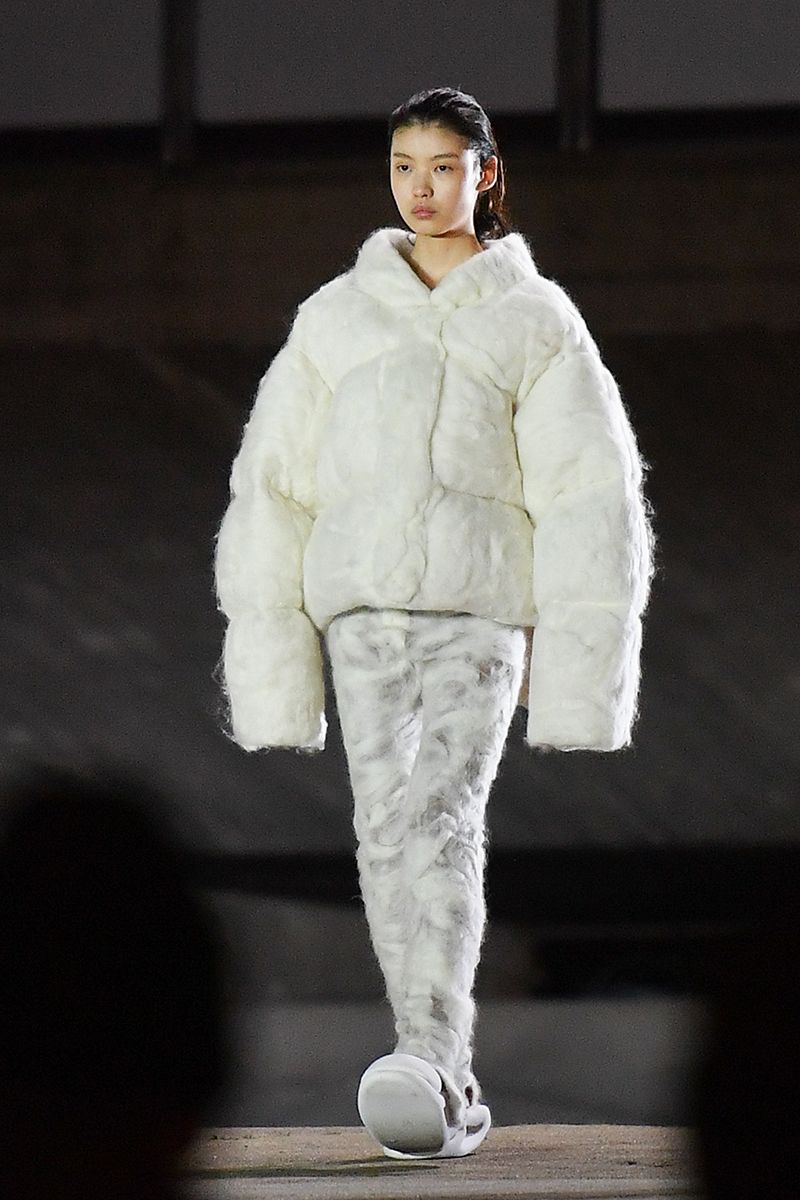 The emotional 90-minute performance, which included tracks like “Ultralight Beam,” “Father Stretch My Hands, Pt. 1” and “Stand On the Word,” had people smiling. Others were in tears.

“A lot of time we put our faith in material things, but those things won’t fulfill us,” preached the collective’s lead singer. “We love Jesus Christ more than an expensive outfit, or watch, or a dream home. Because He wants to give us so much more, and if we allow Him, He’ll do just that.” A powerful message spoken directly to some of the most powerful figures in the fashion industry.

The next day was West’s own fashion show, YEEZY Season 8. It was his first show in over two years, since Season 5, after which he ditched the runway format for private appointments and lookbooks. For Season 8, Kanye took editors to the futuristic Espace Niemeyer — home of the French Communist Party — designed by famed architect Oscar Niemeyer. Here, Ye’s spiritual awakening made it back into a single garment, a guardian angel printed on a sand tank top. It was the only graphic in the collection.

Kanye’s daughter North closed the show, singing her rendition of five-year-old singer ZaZa’s hit “What I Do” to a line-up of 18 models walking around the building. The crowd lost it. Instagram royalty IRL. 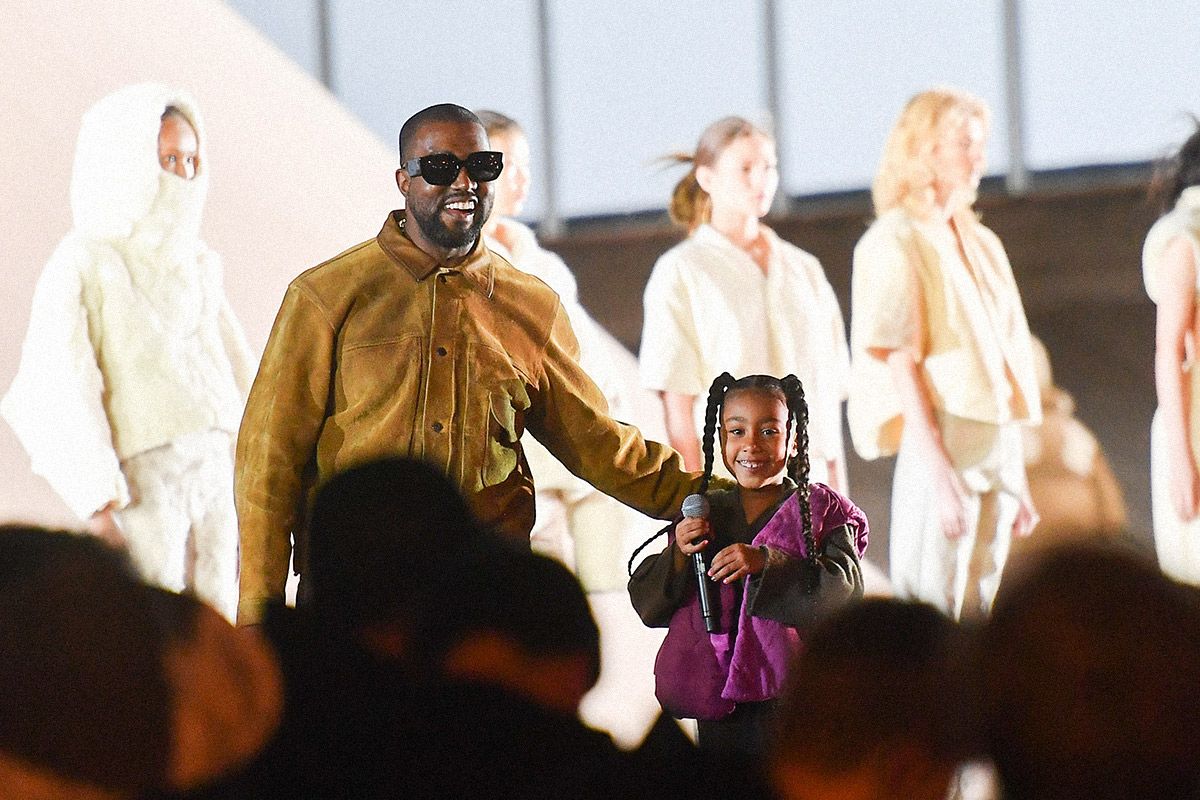 But what did it all mean?

Along with a handful of leading journalists, we caught up with Kanye minutes before the show. Here’s what he had to say.

“It’s already produced, because the idea is there. [But] yes, there will be a reproduction [of the collection]. I like that exercise, also. People talk about mass scale. There are 8 billion people on the planet, so what is mass? Whether this gets as big as the Gap does when I was younger or it’s one, it’s closer to that one than it is to that 8 billion.”

“The wool will be [from the sheep on my ranch]. We’re just looking at different ways to approach things. 90 percent of this collection is muslin in its original fabric. We’ve been looking at how we can create a suede effect or how we can dye it. This is all experimental. Each one of the pieces here is in its infant stage. They’re all new inventions and new approaches to apparel. Now I’m looking at them and thinking, where I can take them with their colors and forms.”

“If there wasn’t a virus, we would have planned to do the next iteration [of the collection]. When I did my first opera at the Hollywood Bowl, two weeks later we did an opera [again]. We got to the fourth opera the night before Christmas and it went [different]. Each thing we do is a form of practice and it’s about getting back on the horse, designing, presenting ideas.”

“We’ve presented so many things that have influenced color palettes and shapes of shoes, like the shape of the 350s that have become the most iconic shoe of the past 15 years. Now we have these new slides that we’re doing, and you’ll see that these shapes will start to affect other designers.”

On His Architectural Future

“[The spaces I’m working on] are all very wabi-sabi and very zen. [The new ranch] is, like, my favorite building. I’ve just been working on the new stuff with Claudio Silvestrin and James Turrell. I don’t want to call it minimal, but more essential spaces.”

On Why He Brought Sunday Service to Paris

“To spread the Holy Spirit, that’s my job as a Christian.”

“Now that I’m married, now that I have two daughters, now that I’m saved, I think about the way I use the clothes and the way I present the models, [and] it’s a whole different mentality to have.”