EVERYTHING YOU NEED TO KNOW ABOUT SUPREME’S LATEST INSPIRATION 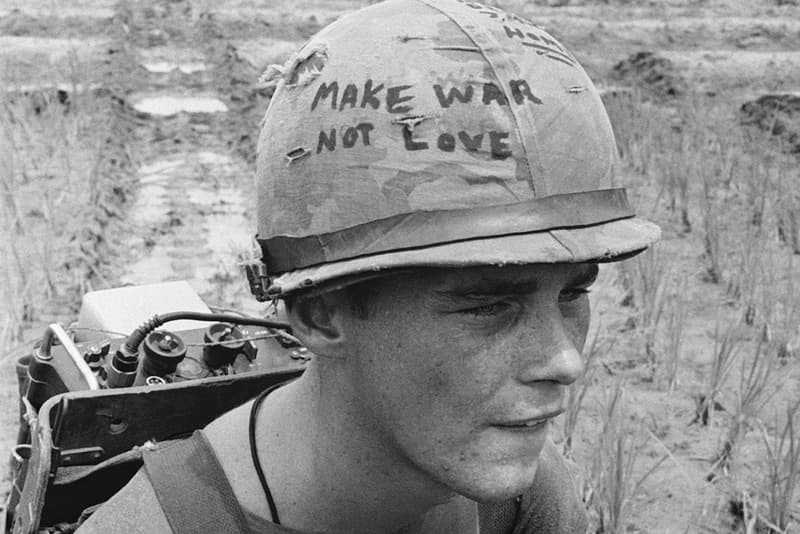 Earlier this week, Supreme teased its newest collection, revealing nothing more than a denim jacket featuring an image of a solider and the words “Supreme is love.” The photo is most strongly associated with The Smith’s 1985 album, Meat is Murder. Considering Supreme’s previous experience with musicians, it might seem odd for them to reference this iconic album cover, but a further look into the image and its history shows how the original creator’s work bleeds into Supreme’s countercultural ethos.

Though the photo is nowadays usually associated with The Smiths album, it is an edited still from Emile de Antonio’s 1968 Vietnam War documentary In The Year of The Pig. The original picture featured a 20-year-old American marine corporal named Michael Wynn, with the words “make war not love” written on his helmet. The Smiths changed the wording to “meat is murder,” while Supreme reverted the wording closer to the original picture with the slogan, “Supreme is love.”

The Vietnam War isn’t obvious inspiration fodder for the New York brand, but the documentary itself and de Antonio’s subsequent career make the director prime material for Supreme. In The Year of The Pig broke several documentary conventions for its time, most notably by eschewing a voiceover and instead relying on a juxtaposition of archival footage and interviews — something commonly seen today in everything from Fyre: The Greatest Party That Never Happened to The Great Hack.

The documentary also took a distinctly anti-Vietnam War stance, and at the time of its release was described by the New York Times as a “stinging, graphic and often frighteningly penetrating movie.”

The film was so controversial that theaters faced threats for screening it. A Los Angeles theater was vandalized for showing the feature, while Chicago and Houston cinemas faced bomb threats. Despite these initial screening challenges, the film became one of the most important documentaries about Vietnam; Francis Ford Coppola cited the work as a key influence for Apocalypse Now while Noam Chomsky dedicated 1989’s Necessary Illusions to de Antonio.

Much like Supreme’s other influences, de Antonio was also a fixture in the New York City arts scene in the 1960s and ‘70s. His 1973 documentary Painters Painting acted as an ode to the city’s artists in the period from 1940 to 1970. The film was notable for capturing several of the world’s most famous artists pre-fame, including the likes of Andy Warhol, Willem de Kooning and Jasper Johns.

This affinity for the arts led to friendships with the likes of Jean-Michel Basquiat — de Antonio and Basquiat interviewed each other for Interview Magazine in 1984. When Basquiat asked de Antonio why he wanted to cover the NY arts scene, the director replied, “I thought the period of New York painting covered by the film was just as important as the Renaissance, or Paris in the second half of the 19th century.” He was firmly part of the counterculture, he was one of the creators of the New American Cinema Group, a non-profit that specializes in the creation of avant-garde films.

Though he passed away in 1989, Emile de Antonio remains a game changer in the world of film and a key figure in the New York arts scene. For those familiar with the origin of that photo of the soldier, it should come as no surprise that Supreme would use it as inspiration.