GIVENCHY SS20 PROPOSES LUXURY FOR THE NEXT GEN

“I want performance. If you’re going to do a sneaker, make it a real sneaker,” she tells Highsnobiety after the show high atop the roof terrace of Florence’s lavish Villa Palmieri. “I’ve collected the shoes for years and I’m a massive fan. Every time I go to Japan I get some.”

The British designer — who in 2017 became the first female head in Givenchy’s history — loves the brand so much that she’s already working on next season’s model she tells Highsnobiety exclusively. “That one will be a real performance sneaker for the [2020 Olympic Games in Tokyo]. It has to be something that’s really missing, that’s my real drive and passion.”

Waight Keller has credible room to play with when it comes to streetwear at Givenchy. Her predecessor Riccardo Tisci was a pioneer in merging the two, once distant, worlds of traditional luxury fashion and streetwear. But suiting and sartorial dressing have re-emerged on the runways in recent seasons, challenging designers to be creative around making formalwear relevant to the streetwear-wearing new luxury consumer.

In that respect Waight Keller succeeded. Her experience working for Calvin Klein and Ralph Lauren in her early twenties certainly helped.

The contrast ran throughout the collection. Soulwax’ industrial remix of LCD Soundsystem’s “Get Innocuous!” blasting through the speakers on the Florentine hills estate proved the point, as did the guest list ranging from Sidney Toledano — chairman and chief executive of LVMH Fashion Group, Givenchy’s parent company — and iconic French editor Carine Roitfeld to American footballer Victor Cruz and Japanese comedian Naomi Watanabe. New meets old in the physical form.

All of it tied back to rebelling against the establishment. But not punk rock and early hip hop culture as has been over-referenced by countless luxury brands looking to “authentically adopt streetwear”. Instead, Waight Keller looked towards how Asia — home of the biggest “new luxury” demographic — is embracing over-the-top dressing as a way of rebelling against an older generation, she explains.

“It’s almost provocative like England in the 1980s. They’re reimagining rebellion in their own way,” she says about Korean youth culture in particular where tattoos, piercings and wild hair at large remain taboo. “But there’s something tougher there, almost goth like, not only in fashion but in the music scene as well. Then I wanted to bring some of the French roots in there too, it’s about the clash.”

Rebellion came in the form of the many female models walking in men’s clothing and the standout casting of androgynous models. Apart from the too commercially merchandized accessories, which felt out of place and could have been saved for capsule collections and shop floors, the brand succeeded in conveying the message.

If Keller remains on this path, she has a big chance of leading the direction of modern menswear for the next generation. 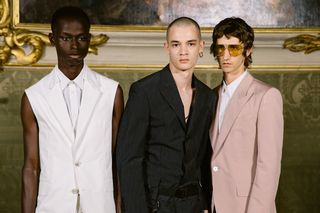 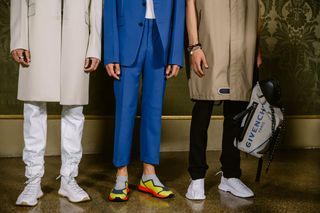